Providence, R.I. (December 21, 2020) – The Rhode Island Mortgage Bankers Association is pleased to announce that the most recent #RIMBARelief campaign, in support of Toys for Tots, was a tremendous success. To date, $10,800 has been raised, and members were on-hand Friday, December 18 at the Cranston Armory to present a check to Toys for Tots just in time for Christmas.

RIMBA’s Annual Toys for Tots Breakfast could not happen due to the pandemic. However, now more than ever, members still wanted to support the organization and help local families in need. The campaign began in early December with RIMBA donating an initial $1,000. A challenge was then put out to RIMBA’s corporate partners and members to help them reach a goal of $5,000. Within 24 hours of issuing the call, Dave Currie of Province Mortgage Associates contributed $500, and he issued a challenge to other members to match or exceed him. Dean Harrington of Shamrock Home Loans raised him by a $1, and shortly after ten other firms or individuals matched. Most recently, Fairway Independent Mortgage made an extremely generous $1000 donation. RIMBA easily exceeded our goal thanks to our members and corporate partners.

The tremendous response was heart-warming, and RIMBA would like to extend thanks to everyone that contributed. Donations are still being accepted by RIMBA for anyone who has not had the opportunity to donate. 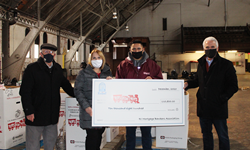 The Rhode Island Mortgage Bankers Association is dedicated to promoting and sustaining responsible home lending in Rhode Island. The mortgage association has over 90 corporate members, which represent thousands of mortgage lenders throughout the state who help businesses and people secure mortgages. As part of its overarching plan to create a better housing market, RIMBA regularly promotes educational initiatives, addresses legislative challenges, and strives to cultivate membership growth. For more information about RIMBA, visit: rimba.org.