The YMCA of Pawtucket Highlights 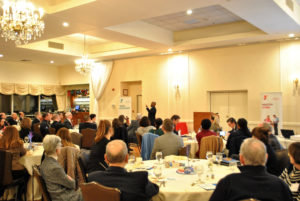 PAWTUCKET (February 5, 2019) — More than 135 guests gathered at the picturesque Kirkbrae Country Club to attend the YMCA of Pawtucket’s 129th Annual Meeting. YMCA leaders highlighted the organization’s accomplishments, praised the contributions of its community partners, and made announcements about governance updates for the new year.

Appreciation was a reoccurring theme throughout the evening ceremony with the announcement of William Hunt Sr. being awarded this year’s Spirit Award, which is presented annually to long-time contributors who have helped the YMCA accomplish its overarching mission.

“Bill’s passion for helping improve the health of Pawtucket residents could be felt at the YMCA, and we cannot thank him enough for dedicating so many years of service,” stated Charlie Clifford, Chief Executive Officer of the YMCA of Pawtucket. Hunt has worked alongside YMCA leaders for over 40 years, joining the Board of Directors in 1976 and later serving on the Executive Committee and as Board President. Most recently, he was instrumental in implementing a strategic plan in 2017.

Hunt was also recognized by the City of Pawtucket with a citation from Carlos Lopez Estrada, who serves as the Deputy Director of Administration for Pawtucket Mayor Donald R. Grebien.

Hunt is one of two Board members retiring this year. Antonio Pires, who served in the Board of Directors since 2008, also announced his retirement and he was commended for his contributions.

As guests’ bid Hunt and Pires a farewell, the ceremony served as a platform to announce the newest member to the Board of Directors. Rachael Bauman, a project manager at the Peregrine Group, LLC., will join the Board of Directors and help the YMCA achieve its mission by assessing the organization’s use of properties and locations.

Clifford says Bauman’s experience will be a welcome addition to the Board, which is tasked with helping the YMCA build strong, healthy communities. “Rachael has supported several organizations through her volunteerism, and she has a strong understanding of the Y’s impact in the community. We are proud to welcome her to the Y family, and look forward to her contributions to the Board and the communities we serve,” Clifford stated.

Dr. Peter Baziotis also reaffirmed his commitment to the YMCA, agreeing to serve as the president of the Board of Directors for a second 1 year term. “Working with the members of the Board has been an experience like no other that has made me feel more passionate about the work I do for the YMCA. I am proud to be serving for a second term, and I look forward to the year ahead,” Baziotis stated.

The YMCA also awarded Dr. Patrick Nugent, a Woonsocket YMCA member, with the Top Campaigner Award, a new award that the YMCA has created to recognize individuals who have brought in the most charitable contributions.

Rick Smith, a motivational speaker and expert in wellness, delivered the keynote address. His motivational speech on overcoming significant health ailments drew a spirited round of applause. The event was sponsored by Navigant Credit Union.

About YMCA of Pawtucket

The Y is one of the nation’s leading nonprofits strengthening communities through youth development, healthy living and social responsibility. Across the U.S., 2,700 Ys engage 22 million men, women and children – regardless of age, income or background – to nurture the potential of children and teens, improve the nation’s health and well-being, and provide opportunities to give back and support neighbors. Anchored in more than 10,000 communities, the Y has the long-standing relationships and physical presence not just to promise, but to deliver, lasting personal and social change. The YMCA of Pawtucket is comprised of five branches across the state: Pawtucket Family YMCA and Heritage Park YMCA Early Learning Center in Pawtucket, MacColl YMCA in Lincoln, Westwood YMCAin Coventry and Woonsocket YMCA.