The difference between history’s boldest accomplishments, and its most staggering failures is often, simply, the diligent will to persevere. 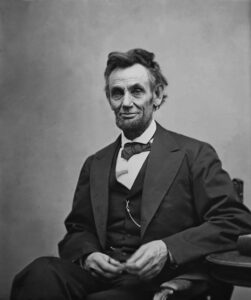 A Lincoln plaque with “Perseverance” superimposed over his picture and inspirational words is displayed in my office. It lists 9 times when Lincoln suffered astounding setbacks, either failing in business, losing his first fiancée, and being defeated for congress and then the senate.

But our 16th president – arguably our finest – can tell us so much about leadership and life, and also marketing.

A lesser man would never have succeeded after all that Lincoln endured. Losing his mother, a harsh father, a debilitating depression, setback after setback, his share willingness to endure the slings and arrows of outrageous fortune and soldier on, is the reason we know Lincoln as one of the greatest Americans rather than just another sorry soul who succumbed to his own sorrow.

In terms of marketing, the need to carry on is so vital. Long after Lincoln’s time, it once was that we needed to reach a prospect 7 times before they reacted; now the estimate is two dozen times. That means we need to continuously stay front and center and not give up when we do not hear from our top prospects. And if that first marketing campaign fails, don’t give up on marketing altogether. You need to try, try harder and try again in today’s hardened and complex world.

Embrace your team of rivals.

Lincoln famously assembled a cabinet of rivals he defeated in the presidential campaign. With the likes of Seward, Bates and Chase, he had the very best around him to advise him during the tumultuous Civil War. Each man brought his specialty, something we should take heed in our own leadership positions. Just like we hire CPA’s, attorneys, and insurance agents to advise us on the best course for our business, when it comes to marketing you should also consider engaging a trusted advisor to make sure you’re properly positioning your products and services, identifying the right audiences, and utilizing the right mix of media and tactics.

Lincoln was regarded as a great story teller and he was comfortable in the halls of power or on the fields with his troops. Relatable stories are always a great method for positioning your brand. Some of the very best commercials capture your imagination and lure you in to deliver the message. Think about the millions in production spent on today’s Super Bowl commercials. Today’s savvy consumer does not expect to be beaten over the head with a product message but expects creativity and relatability in what you communicate to them.

Use your resources to win.

Lincoln never wanted to see the South succeed and did whatever he could to keep the union together. But when war broke out, he played to win, using the overwhelming resources of the North to make the country whole again. When you decide to step up your marketing, you have to go fully in and also commit your resources. The fastest path to failure is to underfund your campaign. In that case, you’re better off staying out of it altogether if you don’t properly fund your campaign. And you will endure setbacks, even lose a few battles, but stay committed with your eye on the ultimate prize – enhanced brand recognition and new clients – during your next campaign.

Lincoln’s affability was perhaps one of his greatest assets. You could argue that his life of difficulty, followed by his role in the greatest calamity in our history, made him so relatable, and that storytelling became his outlet for escape. He was one of those people you wanted to be around, uplifting people rather than throwing them down. When it becomes your turn, remember the Lincoln way.

John Houle is the president of JH Communications and Main St. Media and can be reached at 401.831.6123 or at john@johnh376.sg-host.com